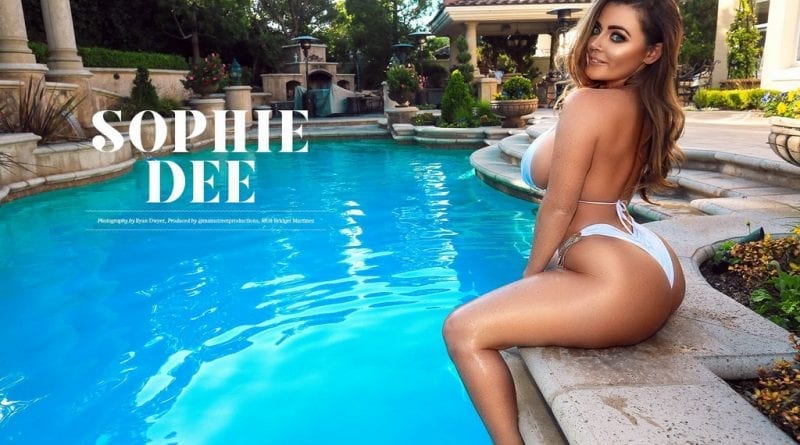 The dazzling adult performer, outfitted on the cover in an eye-popping lacy black bra and panties ensemble, flaunts her amazing figure in an impressive multi-page pictorial shot in the warm California sunshine by Ryan Dwyer and produced by Mainstream Productions.

“I grew up with FHM as the quintessential ‘lad mag’ in the UK, so it means a lot to me to represent the brand on the cover and in the pages of their Swedish edition,” said Dee of the men’s magazine’s colorful spread.

Dee is seen lounging glamorously poolside in a white bikini, busts out of a green swimsuit in the front seat of (and next to) a classic roadster and poses seductively on the beach, barely covering her incredible assets.

“The shoot was lovely and a lot of fun, and the cover and pictorial photos turned out beautifully; I hope fans love the layout as much as I loved shooting it!”

Sophie Dee’s issue is now available at leading newsstands and online through Magzter.com.

FHM is an online men’s lifestyle magazine that previously was a print publication. It contains features such as the FHM 100 Sexiest Women in the World, which has featured models, TV presenters, reality stars and singers.