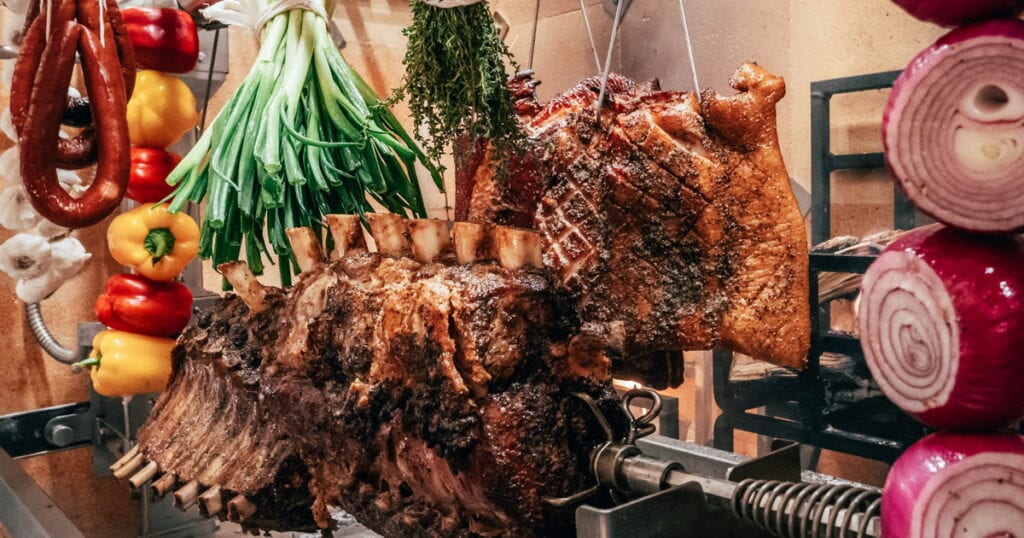 Bacchanal Buffet to Reopen at Caesars Palace on May 20th

Bacchanal Buffet at Caesars Palace redefined the buffet experience when it opened in 2012. Now, following more than a year of renovation, the award-winning buffet will reopen on Thursday, May 20, showcasing a multimillion-dollar enhancement.

Bacchanal’s seafood, carving, American and Latin kitchens, as well as the entrance and dining room, have all received major upgrades and improvements. In addition to an all-new look and feel, more than 30 new dishes have been added to Bacchanal’s already impressive menu. For the first time, Bacchanal is introducing reservations at OpenTable.com.

“Bacchanal Buffet at Caesars Palace has been a world-renowned culinary destination for many years,” said Sean McBurney, Caesars Entertainment Regional President. “We are incredibly proud of all the work we have put into it over the past 14 months, from the design and construction to the research and re-engineering of the menu. We look forward to welcoming our guests back and seeing their faces light up when they experience and, most importantly, taste all the new enhancements.”

Designer Tetsuo Aoyagi, now of MUKU design studio inc. in Tokyo, was the original designer of the $17 million buffet back in 2012 and was once again engaged to assist with Bacchanal’s recent transformation. The updated design still reflects the original concept of nature with natural textures and materials like glass and stone woven throughout, reminiscent of ice caves, mountains, and more.

The cornerstone of Bacchanal continues to be its nine open, interactive kitchens, and with its new design, guests will have an even clearer view of the action with an array of new, state-of-the-art equipment. Open-fire roasting grills will be used to prepare prime rib and other premier cuts to perfection, while new steaming and refrigerated display systems will ensure dishes like crab legs are served market-fresh.

In addition to the design enhancements, Bacchanal will introduce more than 30 new dishes to its robust menu. Those additions include:

Bacchanal will reopen with dinner served Thursday-Monday from 4 p.m. – 10 p.m. For the first time, Bacchanal welcomes and encourages reservations on OpenTable.com.

Since opening in September 2012, Bacchanal Buffet set a new standard for Las Vegas buffets and continues to redefine the buffet experience by offering elevated global cuisine made fresh daily by a team of specialized chefs who oversee the preparation of the food in nine open interactive kitchens. In its first year alone, Bacchanal Buffet was named the number one buffet in Las Vegas by USA Today, Las Vegas Review-Journal, and Las Vegas Weekly.

Bacchanal Buffet will implement Caesars Entertainment, Inc.’s (“Caesars”) new health and safety protocols, which enhance its existing plans and practices in these areas. All Caesars properties are focused on the well-being of Team Members, guests, and the community, and continue to work to create an environment with high standards of sanitization and physical distancing practices. Among the enhanced health and safety protocols include more frequent cleaning and sanitization. Caesars has also implemented a health screening program for all employees. Team Members and guests are required to wear masks, which the Company makes available, at all Caesars properties.

The resort also features nearly 130,000 square feet of casino space, including a recently renovated race and sports book boasting the largest screen on the Strip at 138 ft., a five-acre Garden of the Gods Pool Oasis, the luxurious Qua Baths & Spa, COLOR Salon, five wedding chapels and gardens, and the 75,000-square-foot OMNIA Nightclub with the top DJs such as Calvin Harris and Martin Garrix. The 4,300-seat Colosseum, Billboard Magazine’s “Venue of the Decade: 2000 – 2009,” spotlights world-class entertainers including Usher, Sting, Keith Urban, Rod Stewart, Reba, Brooks & Dunn, and Jerry Seinfeld. The Forum Shops at Caesars Palace showcases more than 160 boutiques and restaurants. Caesars Palace is operated by a subsidiary of Caesars Entertainment, Inc. (NASDAQ: CZR).