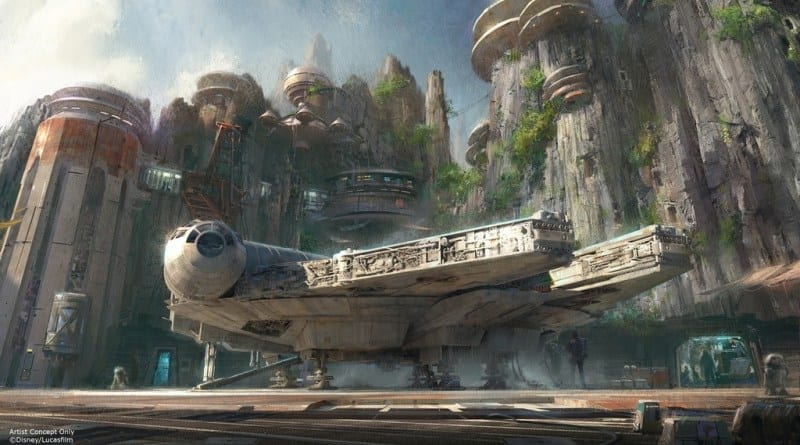 Star Wars Land is Coming to the Disneyland Resort

There are some exciting changes coming to the Disneyland Resort. Fans have waited a long time for Star Wars Land to come and it’s on its way.

You’ll want to make sure you visit Disneyland before January 10, 2016, as some of your favorite attractions will be either closing for good or just temporarily.

When Walt Disney created Disneyland, he said, “Disneyland will never be completed. It will continue to grow as long as there is imagination left in the world.” Well, here we are 60 years later and that statement couldn’t be truer. A whole new land is planned for Disneyland, and it’s appropriately named Star Wars Land.

During Disney’s D23 Expo, plans for Star Wars Land were announced. The new land will be north of Frontierland and will cause some attractions to close.

There’s good news and bad news, so let’s just rip off the band-aid and get the bad news out of the way first. Since Star Wars Land will encompass about 14 acres, Disneyland’s largest expansion, it’s footprint will be over Big Thunder Ranch and it will permanently close. If you’re unfamiliar with this part of the park, you pass by it when you walk from Fantasy Land to Big Thunder Mountain. Big Thunder Ranch has an all-you-can-eat barbecue place, which I’ve been meaning to try and now have a reason. There is also a petting zoo, where during the holidays you can meet Santa and real reindeer.

This is the only permanent closure. During the construction of Star Wars Land, some attractions will close temporarily, on January 10th. Those attractions include almost anything along the Rivers of America, including the Mark Twain Riverboat, the Sailing Ship Columbia, the Davy Crockett Explorer Canoes, and the Pirates Lair on Tom Sawyer Island. Fantasmic, Disneyland’s nightly show, will also be down through the construction. Most of those attractions I rarely go on, so for me, it’s not that big of a deal. But, an attraction I do like that’ll be closed, if nothing more than a place to rest for a bit, is the entire Disneyland Railroad. 🙁

So, now to the good news! On November 16th, Season of the Force in Tomorrowland will begin. What I’m super excited to see is Hyperspace Mountain. You know how they turn Space Mountain into Ghost Galaxy during Halloween. Well, Hyperspace Mountain will have an X-wing starfighter battle going on during the ride. HOW COOL! You can also check out Star Wars Launch Bay, which will give you a sneak peek into Star Wars Land. Finally, in the Tomorrowland theater, you can watch classic scenes from some of the old Star Wars films.

All in all, I think this is a great move for Disney Parks. For years, fans have wanted a more inclusive Star Wars experience at the parks and now they will get it. One thing is for certain. Walt Disney got it right. The only constant is change.

Star Wars-themed land, currently and unofficially referred to as Star Wars Land, is an upcoming themed area being developed at Disneyland at the Disneyland Resort and Disney’s Hollywood Studios at Walt Disney World. The new land was announced by Disney CEO Bob Iger at D23 Expo on August 15, 2015. The land at each park is expected to encompass 14 acres each. According to Disney COO Tom Staggs, construction on both versions of the land is expected to begin in early 2016.

The land will be built just to the north of Frontierland, where Big Thunder Ranch is currently located and will use some backstage areas. In order to make room for the expansion, Disney purchased land off-site in order to replace the offices and warehouse that will be removed to build the land. Conceptual drawings for the new land show it to be a new world that will be a remote trading port and one of the last stops before wild space. – Wikipedia