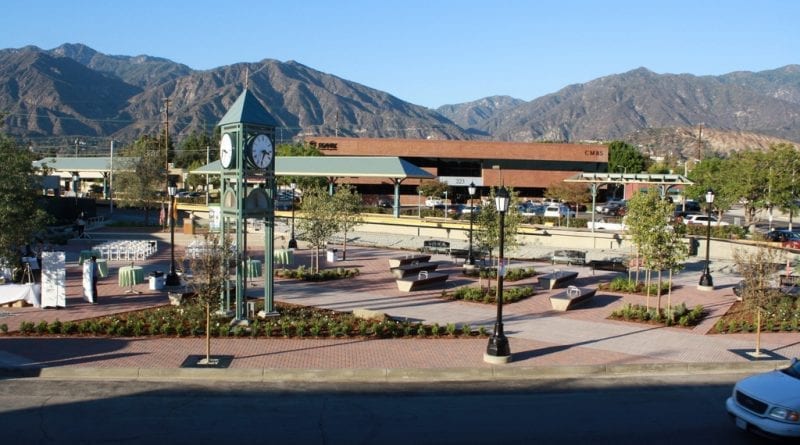 Yesterday, the Foothill Gold Line joined the city of Arcadia officials in dedicating the new transit plaza, which sits adjacent to the future Arcadia Gold Line station and parking facility.

The plaza was a multi-year project that was made possible by a generous grant from the Federal Transit Administration (FTA), with local funding coming from the city of Arcadia and the line. The plaza – which includes bus and bicycle facilities, artwork, brick and concrete paving, drought-tolerant landscaping, and a centerpiece clock tower – is located in downtown Arcadia and is the city’s newest gathering space.

“The FTA was the prime partner in funding the new Arcadia transit plaza, along with other multi-modal enhancements at the six new Foothill Gold Line stations,” stated Habib F. Balian, CEO of the Construction Authority building the line. “This plaza is a good example of how the use of the federal grant provides the facilities needed to encouraging future Gold Line riders to arrive at the station by bus, on foot, and on bicycles, while also creating an impressive new civic space.”

About the Foothill Gold Line

The line is a 24-mile extension of the Metro Gold Line light rail system, being built in two segments (Pasadena to Azusa and Azusa to Montclair). The first segment, under construction now, is Pasadena to Azusa, which includes six new stations (including the Arcadia Station). The line goes from Pasadena to Azusa is fully funded by Los Angeles County’s Measure R. The project is overseen by the Metro Gold Line Foothill Extension Construction Authority, an independent transportation planning and construction agency created in 1998 by the California State Legislature. The Pasadena to Azusa segment is on time and on budget and will be turned over to Metro in September 2015. Metro will determine when passenger service begins.