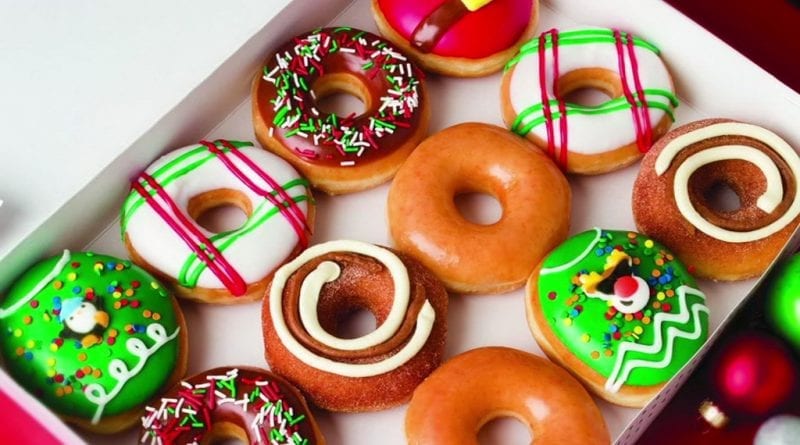 Pssst! Don’t tell anyone, but Krispy Kreme is bringing back its $1 Dozen Donuts Deal next week. YASSSSSSSSSSSSS!

Christmas is right around the corner, which means it’s the season to Eat, Drink, and be Merry. Well, Krispy Kreme has at least got you covered with the eating part with their super popular, one day only, ultra promotion of the year.

December 12th, this Wednesday, visit almost any Krispy Kreme nationwide and order any dozen donuts of your choosing. Do you like their holiday flavors? Get those! How about original gazed? Those are ALWAYS available! Maybe, you’re the type of person that likes to get a little messy with your donuts. Well, you’re in luck, because you can get jelly donuts with your favorite fillings too!

And, because you’ve been a good boy or girl this whole year, Santa has instructed his elves at Krispy Kreme to give an EXTRA dozen donuts for only $1 more. You can walk into work and give those to your co-workers while shouting HAPPY HOLIDAYS EVERYONE! They don’t have to know they were only $1.

As a side note, the second dozen is only their original glazed donuts, because the elves still have to have the energy to make toys. But, not to worry, as most people prefer the original the most anyway. What a great way to spend $10 ($8-$9 for the first dozen and $1 for the second).

Your friends, family, and/or co-workers will enjoy a middle of the week surprise, brightening up their holiday season. You might even want to wear a Santa hat.

Krispy Kreme Doughnuts, Inc. is an American doughnut company and coffeehouse chain founded in Winston-Salem, North Carolina. Krispy Kreme founder Vernon Rudolph bought a yeast-raised recipe from a New Orleans chef and, in 1937, rented a building in what is now historic Old Salem in Winston-Salem, North Carolina, and began selling to local grocery stores. Steady growth preceded an ambitious expansion as a public company in the period 2000-2016, which ultimately proved unprofitable. In 2016, the company returned to private ownership under JAB Holding Company, a private Luxembourg-based firm.