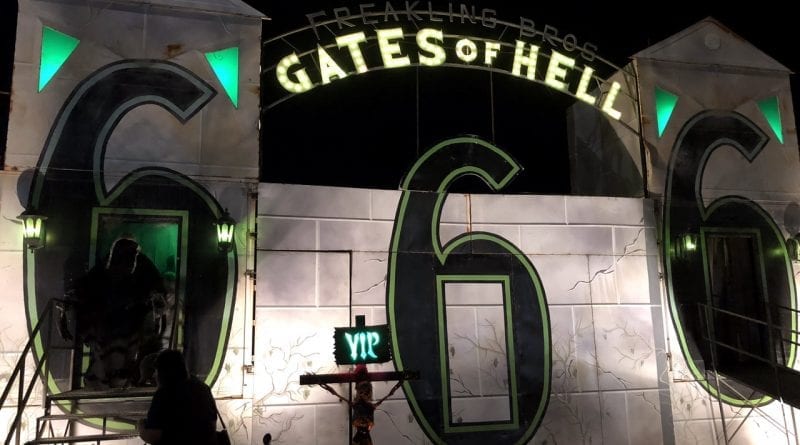 Fresh off a record-breaking season and an appearance on Travel Channel’s Ghost Adventures, Freakling Bros. Horror Shows has announced the return of the world-famous Trilogy of Terror for its 27th horrifying year in Las Vegas.

Check Out the Video Review Below from Travelivery’s Own Jeremy

Rated the scariest haunt in the country by USA Today, Freakling Bros. The Trilogy of Terror will once again feature the award-winning Gates of Hell, Nevada’s first and only R-rated attraction, the experimental COVEN of 13, and the classic Castle Vampyre, which will be celebrating its final season, leading the way to a new haunt in 2020.

Freakling Bros. will kick off the Halloween season with two opportunities to become a member of the Freakling family. Auditions for the 2019 season will be held Saturday, Sept. 14 and Saturday, Sept 21 at noon inside Pizzeria Monzu at 6020 W. Flamingo Rd #10, Las Vegas, NV 89103. Complete training, including costumes and makeup, will be provided. Candidates must fill out an application on their website, prior to attending casting interviews. Candidates must be at least 18 years of age, have big personalities, and most of all, have a passion for Halloween.

Located at the Grand Canyon Shopping Center at 4245 S. Grand Canyon Dr. (Flamingo and the 215 Beltway), the Freakling Bros. The Trilogy of Terror box office will operate from 7 p.m. to midnight Friday – Saturday and from 7 p.m. to 11 p.m. Sunday – Thursday, through Thursday, Oct. 24. The box office will also remain open until midnight from Friday, Oct. 25 through Thursday, Oct. 31. Castle Vampyre, COVEN of 13 and Gates of Hell will remain open until every ticket holder has entered. Dates of operation will be Oct. 4 – 6, Oct. 10 – 13 and Oct. 17 – 31.

For more information on Freakling Bros. The Trilogy of Terror, call 362-FEAR or visit their website.

In 2011, Duke and son JT Mollner introduced the first-ever R-rated attraction in Gates of Hell to the haunted experiences at The Trilogy of Terror. An experiment in serious, uncompromising, interactive horror, Gates of Hell helped The Trilogy of Terror earn top honors from The Scare Zone, earning a score of 6 on a scale of 0 – 5. The Trilogy of Terror was also named #1 in the Western United States. In 2015, Freakling Bros. introduced the groundbreaking COVEN of 13, a horrifying journey through witches, warlocks and black magic, and in 2019, announced the legendary Castle Vampyre would celebrate its final season.